UPDATE 3: Added a test version of the game that implements a stamina system (download only). More info in the devlog.

UPDATE 2:  fixed a few bugs and tweaked a couple of things.

UPDATE: I updated both versions of the game with a couple of tweaks and performance improvements.

This is a very early prototype

In this game, you create the dungeon and explore it at the same time! Control the falling pieces, move them, rotate them, connect them and make them fit together. As the knight, wander the maze-like structure looking for gold and defeating enemies.

Jut like in the classic puzzle game Tetris, creating a full row of tiles will make them disappear. And that includes whatever was inside them! So be careful not to place your knight inside a line that is being cleared!

The goal of this prototype version of the game is to collect as much loot and level up by defeating the enemies before the map gets filled to the top. When that happens, a portal will appear. Reaching it will mean victory.

Note that currently leveling up and collecting gold doesn't have any practical purpose, it's just a way to keep track of how long you've been able to keep the game going

Getting stuck with no way out is not uncommon inside a dungeon. Luckily for you, the knight is very resourceful and can use different tools to help him during the exploration:

Controls:
- WASD/Arrow keys to move your character
- Q to switch the active item
- (Hold down) Space while moving to use an item

I know multiplayer is highly requested and I agree that it's a great fit for this game. I didn't have the time to properly implement such a major feature for this early demo, but I think it is possible to work around it: if you're willing to play with 2 people on the same keyboard, the player controlling the knight can use the left side (Q-WASD-Space) and the one controlling the pieces the right side (IJKL). I know it's not the ideal setup of course, but maybe this can give you a taste of what it could feel like. (If you want to play competitively, remember that the knight can destroy tiles with the bombs, potentially screwing a line that the other player was setting up ;-P).

I've said it maybe too many times here, but this is a very early prototype. You could call it proof  of concept, or tech demo. As such, it's is extremely barebones and many many things about the game are subject to change (if the project will move forward). Of course, all kinds of feedback are extremely welcome (and are kind of the point I'm even releasing this demo). So please don't hesitate to comment, leave feedback, critiques, suggestions, ideas, etc. Oh, and bug reports! Can't forget about those.

this is the most fun and challenging game I've played ever, the fact that you have to focus on both tetris and the position of the pc is a genius concept!

Wow! This game makes me both happy and sad.

Happy to see the best mash-up I've seen in ages: Rogue meets Tetris! So much potential! So many possibilities!

Sad to see that the last update was almost 3 years ago--in other words, this game is dead.

If you're really not interested in taking it further, have you considered open-sourcing it, to see if someone can make more of this fantastic idea?

This is a great concept mash up, really well implemented with great art!
I had fun playing!

Each class could have a special room that has a chance to spawn, and different abilities that could give the gold and leveling system use and further upon the puzzle system.

Definitely a cool concept, I think it needs to be a smaller board at first and have remappable controls. Also, I think starting with 5 tools is too much, it makes the game too easy. Can't wait to see a more full version.

I created an account just to leave feedback for this game. I see some comments about it being too much to handle. Look at first it's slightly overwhelming but after a couple turns you really get the hang of it and it's an amazing mashup/concept.

If you do have any sort of turn based - definitely don't make it the default mode.. it would take too much away from the basis of the game. Competitive modes definitely sound cool.

Only feedback I would give at the moment is the usage of the bombs/tools seem a little laggy/awkward.. not sure how to improve that. But I love the concept and am enjoying playing it.

Perhaps some way to progress to deeper dungeon levels? Like hit a certain score and stairs open up to a lower level? Something like that would be cool.

This is a great idea, I'd love to see a full version of it, but here are a few ideas:

This seems really cool, but its just... too much to handle all at once. I think maybe a turn-based option/game mode/whatever would be cool, and lower the  barrier to entry a bit.

Such a cool idea and great design for an early prototype, really fun as is but please keep this going so we can enjoy a full game :)

A couple of quick controls scheme fixes to make the game more approachable:
1. Display default key mappings on the SIDES of the board (like Heroes of the Storm does). EDIT: See that you get this display on PAUSE. But I'd still have a trimmed version of this appear all the time, player can remove through a setting.

2. Allow players to remap keys... I expected TETRIS to be left side of KB (ASDF), AVATAR to be right side (Arrow Keys)

3. This game would be MUCH more fun to play with a dual-stick controller. Add that :)

1. Start with smaller board that is more zoomed in so player can get a sense of the key elements and see them more clearly

2. Have avatar, monsters, items stand out way more (color, size). They blend into the maze background.

Sorry but I don't have three hands. XP

wasdq and space with one hand, ijkl with the other isnt bad at all .-.

Not on an azerty keyboard.

i can do what he described on a regular qwerty keyboard

Sorry, but what is the point of that comment of yours?

To have no purpose

I really adore this concept!  I've been playing it non stop since I downloaded it.  I will say that I think a co-op feature would be fantastic for this game as I had a hard time getting used to controlling both the action and the tetriminoes.  The art and the music are great and I'm really excited to keep seeing this through future development!

I really like this concept! as i was playing it, i found it a bit difficult to balance both tetris and dungeon-crawling. in my opinion the fast paced nature of it lends itself more towards co-op, as you're going throughout the dungeons your friend builds more as fast as he/she can to get you out of situations (also a VS mode would be hella fun).

I feel like adding a seperate gamemode of playing tetris until you die and then making it to the end of whatever dungeon you just built and it gets harder the further you get up the screen would be a great addition to this game.

Sorry for all of the run-on sentences lmao.

im loving it so far! Keep it up!

very difficult to get used to, but pretty fun once i got the hang of it.

if you were to expand on this, you could introduce the dungeneering and tetris seperately before combining them

This is really cool. I enjoyed managing the two activities! 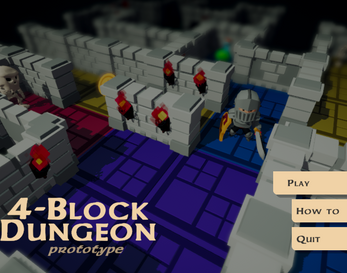 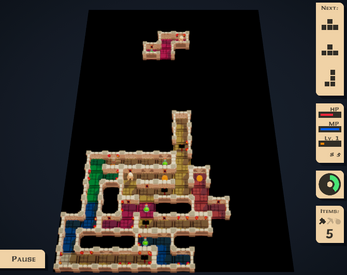 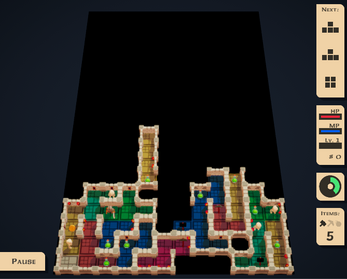 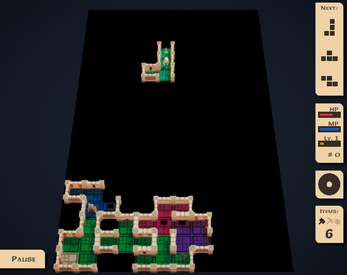 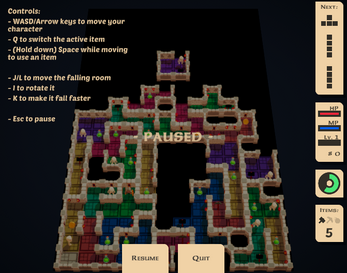